This summer, all northern hemisphere was under an unprecedent heatwave. Temperature records have been reached and exceed. In addition, there is a long period without rain. The drought is settled. 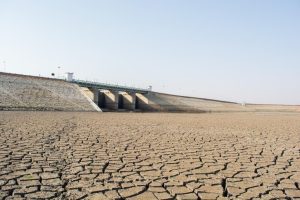 Heatwave periods are more and more intense those last years. In July 2021, there was already a peak of 49,6°C record in Lytton in Canada. This year, temperatures exceed for the first time 40°C in UK, Japan and Central US. Those records could only be a consequence of the acceleration of the global warming.

In addition to heatwave, there is a rainfall deficit. River and lake level have been reached drastic low level. In many places, those drop in water level have revealed vestige from the past: a World War II warship in the Danub River in Serbia, dinosaur tracks in Texas, a prehistoric stone circle in a lake of Spain, … Those discovery are the proof that low level were never reached during the past decades.

The drop of water level is problematic for storage and supply. Agriculture is the first sector to be affected. With heatwave, it became essential to irrigate field, but it impossible with the lack of water. Agricultural lost are huge. Several countries suffer of starvation, in the Horn of Africa: 22 million people are at risk of starvation by September.

Another sector affected is hydroelectricity. Low level does not enable to plant to produce electricity. In China, many plants and factories had to close which cause a lot of financial lost.

The drought enable ignition and spread of fire. In France, more than 62,000 hectares burned. In Amazon Forest, in one day, there were almost 3,360 fires referenced. It is a record three times as high as previous record. Weather conditions make difficult to control and stop fires.

On the other hand, Pakistan is under water. Because of heavy monsoon rains and melting glaciers, one-third of the country is underwater. This flood caused the death of 1,100 people and affected millions of others. Floods are not new in this country, but this one was particularly extreme witch put questions for the future.

Mental Health : The increasing of ecoanxiety