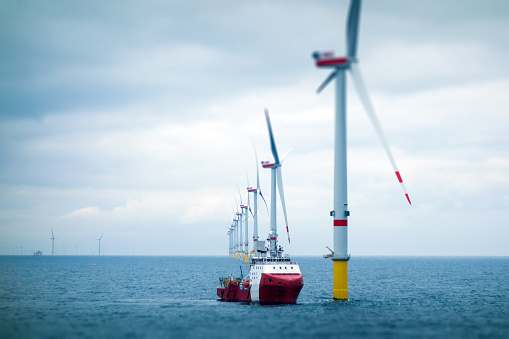 Germany, Denmark, the Netherlands and Belgium announced on Wednesday, May 18, that they would install nearly 150 gigawatts of wind turbines in the North Sea by 2050, to make it the “green power plant of Europe” and do without Russian hydrocarbons.

They want to turn the North Sea into a “green power station” without Russian hydrocarbons. At a press conference in Esbjerg, alongside German Chancellor Olaf Scholz and Dutch Minister Mark Rutte and Danish Prime Minister Alexander De Croo announced that they want to quadruple their total offshore wind capacity by 2030, and ten by 2050.

The announcement comes in conjunction with a €210 billion plan presented by the European Commission which foresees an acceleration of renewable energies and energy savings to free itself as quickly as possible from Russian gas imports, in response to the war in Ukraine.

The Commission also proposed on Wednesday to raise its target of renewables’ share of the 2030 energy mix from 40% to 45%. the EU aims to reduce greenhouse gas emissions by at least 55% by 2030 and carbon neutrality by 2050.