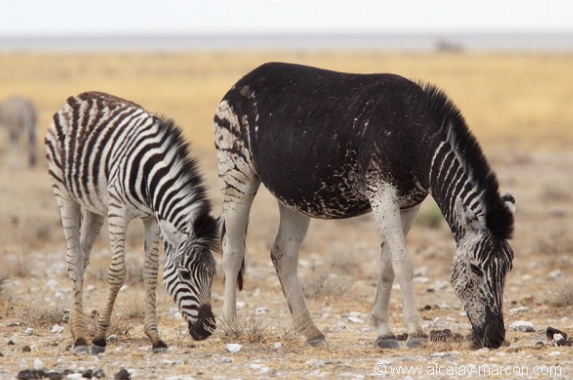 Zebra stripes would be of interest for their safety in numbers by “confusion strategy”. Predators, when approaching prey, would be “disturbed” by these animals in groups, which move quickly and look alike.

According to recent studies, strange stripes have been observed in different subspecies of zebras. Some have mottled coats, some have brownish spots, and some have discontinuous stripes. A high rate of inbreeding within zebra harems would be at the origin of these coat anomalies.

We can imagine, from these results, that the appearance of abnormal stripes could have consequences on the overall behavior of these already threatened animals.

This inbreeding is a recent phenomenon as zebras see their territories diminish. The fragmentation of territories leads to changes in the distribution of individuals and limits communication between the different harems. The harems are shrinking and the zebras are forced to stay in family centers whereas before they could go to other territories.

These striping anomalies lead us to wonder about the consequences they may have on the life expectancy of juveniles. Indeed, scientists have just highlighted that mortality would be higher in individuals with abnormal stripes, taking into account predation.