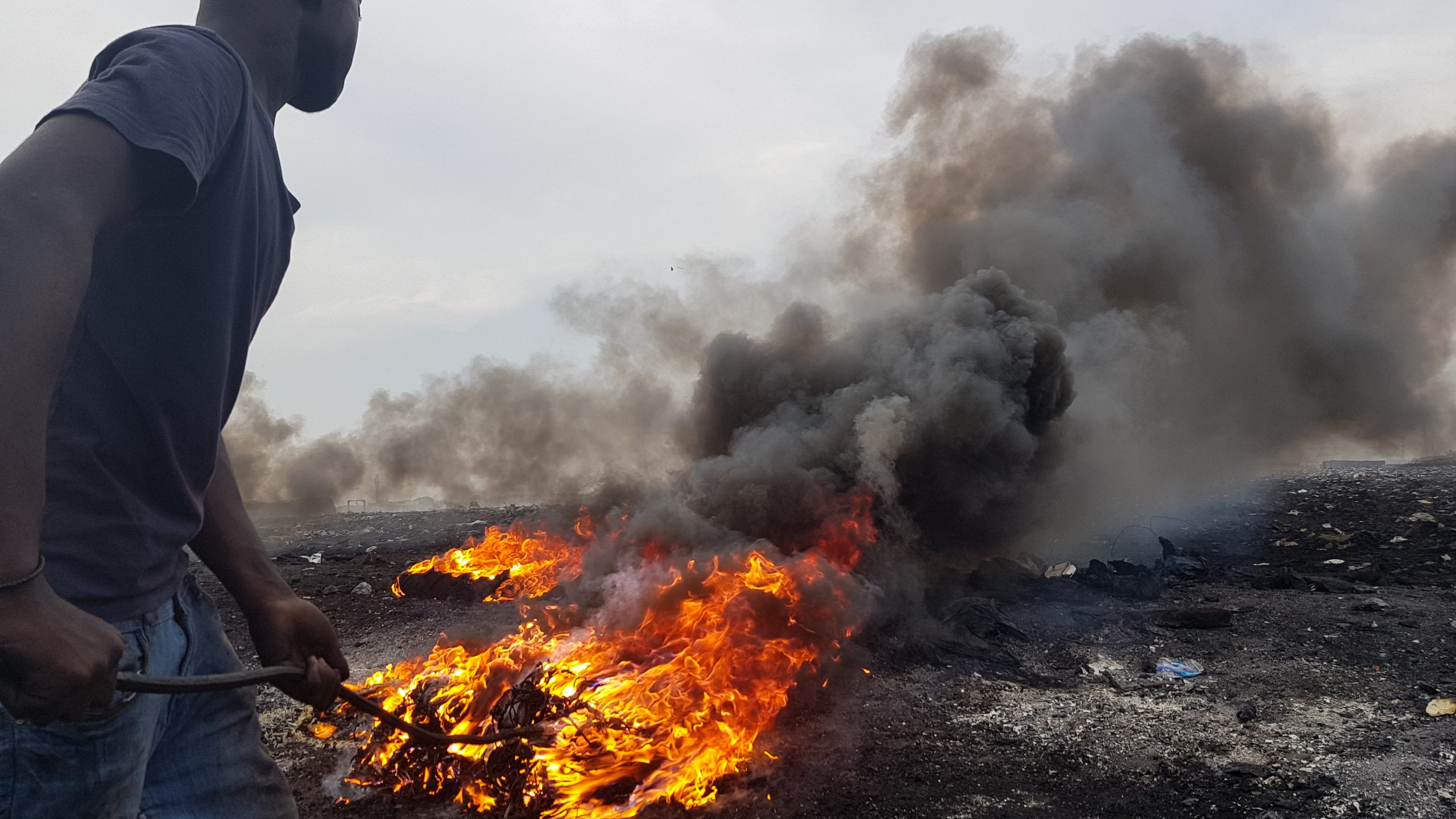 Burning sheathed cables to recover copper at the Agbogbloshie e-waste landfill near the center of Accra, Ghana's capital city.

Although electrical and electronic equipment is central to modern life, it generates e-waste that is overrunning developing countries. Poor and vulnerable people in these countries, especially children, are particularly affected by health risks. E-waste “is a scourge for the health of millions of children” warns the WHO.

The growing amount of e-waste is becoming a major environmental issue world-wide. The 2021 WHO report[1] on e-waste and child health analysed the health risks of e-waste for millions of children working in low-or-middle income countries. It was essential to inform everybody about the harmful health effects on the poorest and most vulnerable people in low-or-middle income countries.

The poor and vulnerable populations of developing countries particularly affected

According to The Global E-waste Monitor 2020[2] “53.6 million metric tonnes (Mt) of electronic waste was generated worldwide in 2019”. It is predicted that global e-waste will reach 74 Mt by 2030. The growing amount of e-waste is a consequence of overconsumption and overpopulation.

The poorest inhabitants of these countries live near these open dumps and/or live off waste collection which is a source of income for these people. Children live, play and work in these dumps.

The health and well-being of future generations in these countries is threatened by e-waste pollution. According to the 2021 WHO report “some 152 million children aged 5-17 years are engaged in child labour, including over 18 million children in industries of which waste processing, and some 73 million children worldwide are working in hazardous labour, with still uncounted numbers in the informal waste recycling sector”. And “between 2.9 and 12.9 million women” including women of childbearing age.

All e-waste contains precious materials, such as gold, silver, palladium, copper, and other metals as well as toxic chemicals. According to the 2021 WHO report, these toxic substances can pollute air, soil, dust, water, and food. Workers (both children and adults) and their families are exposed to these pollutants by ingesting contaminated food and water, or by inhaling contaminated soil and dust, or by dermal exposure. Foetuses and children can be exposed by ingesting breast milk and through transplacental exposure.

Children have a risk of injury when they play and work in dumps. And they also face harmful health effects.

The number of studies on the harmful effects of e-waste has increased providing mounting evidence of the risks to human health.

As e-waste increases, action needs to be taken. At global, national regional and local levels, action programmes or general policies on e-waste and health are being developed.

Treaties control the export of waste. Many sectoral initiatives are in place to support those who depend on this hazardous recycling. Companies are implementing a circular economy process to make products with less toxic and more easily recyclable materials. But there is still work to be done to better manage this waste and develop the circular economy.

Cigarette butts: the most abundant form of plastic waste in the world