In a century, rhinos’ horns shrunked by several centimeters, this is what a Cambridge’s University study showns. The cause ? Poaching.

Poaching is prohibited by law, but this does not prevent this bad habit from continuing. Some species are targeted more than others: rhinoceros are one of them, because of their highly prized horns. Unfortunately, because of these practices led for decades, rhino horns shrink, a Cambridge University study tells us. 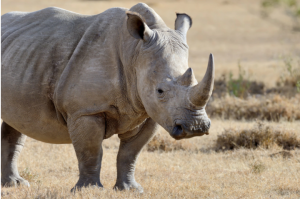 Published in the Journal of People and Nature, this study is based on thousands pictures from the past 140 years. To conclude that rhinos’ horns shrunk, British researchers compared over 100 years of rhinos’s pictures. At first, their base included more than 1,000 photos. They selected those of 80 different rhinos to compare the evolution of the horn’s size on the muzzle and that of the other parts of the body, and this since 1886. The result between the photos taken 100 years ago and the current ones is clear: the length of rhinos’ horns has definitely decreased for the five different species. Even for Javan’s and Sumatran’s rhinos, which naturally have smaller horns.

One of the explanations is that the shrinkage is due to poaching because these animals have been killed for their horns, certain beliefs lending them pseudo powers over health.

Rhinos did not consciously shrink their horns to avoid being hunted. This evolution is the result of indirect genetic selection, and it is, despite everything, a form of adaptation of the species. Indeed, for a century, the rhinos with the longest horns have been victims of poaching, and reproduce less and less, explain the researchers. At the same time, short-horned’s rhinos being less targeted by poachers, they were able to transmit these physical characteristics to their descendants, live longer and reproduce more. This contributed to an overall reduction in horn size for all species.

Many consequences
This survey tells us something else : other parts of rinos’ body have not evolved. Only the horns have shrunk, and this is not anecdotal. That is not good news for free-roaming animals, because those horns obviously have a use. Rhinos are herbivores, they use them to grab food or to defend themselves against predators and having smaller horns can be detrimental to their survival.

All this while at the same time these animals remain threatened by hunting, despite the bans. Today, four of the five rhinos species living in Africa and Asia are on the verge of extinction, which makes the situation worrying.

About black rhinos, a research published in Proceedings of the Royal Society B in April showed that the impacts of poaching on their survival are greater than expected. This combined with the low birth rate, the probability that black rhinos will experience extinction in the next few years is 70%. And above all, it is necessary to protect the females, which are fertile.

–       BES Press Office, « Rhino horns are getting smaller, according to analysis of artwork and photograpgs », British Ecological Society, 1 november 2022 : https://www.britishecologicalsociety.org/rhino-horns-are-getting-smaller-according-to-analysis-of-artwork-and-photographs/

–       Colin Fernandez, « Rhino horns have SHRUNK over the past century, because of hunting by humans, study warns», Daily Mail, 1 november 2022 : https://www.dailymail.co.uk/news/article-11375781/Hunting-humans-caused-rhinos-horns-grow-shorter-length-scientists-say.html