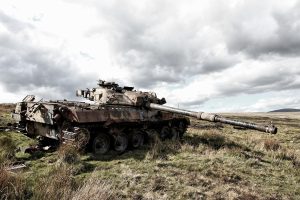 The electrification of the army for tomorrow?

With the challenge of the energy transition, opinions and policies are turning away from oil and gas to invest into renewable and low-carbon energies. But in the current situation it seems complicated to go to war without oil. We know that it exists several transports which do not need oil. However these technologies are unsuitable for the military. Electric tanks represent a huge logistical problem. They must therefore be considered as a utopia and not usable on the battlefield.

Several armies went into the electrification of a new generation of vehicle. Some electric vehicles have a range of 300,350 km2 like their diesel twins. But one of the major obstacle remains the reloading capacity. We cannot conceive charging stations on a battlefield.

Today, no army has the capacity to ensure fast and efficient electric vehicle charging. In addition, charging stations should have the ability to adapt to all types of hostile environment, jungle, desert, extreme temperatures. But research in this direction is intensifying.

The American army begins its electrification

The US Congress passed the Defense Authorization Act 2022 which includes the possibility of using light electric reconnaissance vehicles. This vehicle is based on a Jeep like model. It will be studied to integrate the equipment used by the US Army. The US military has been using electric vehicles for some minor missions for some time now. To use these electric vehicles for more regular use, serious specifications have been established to avoid problems in the field. The technology used in the batteries must have optimal autonomy and flawless reliability. This project had been shelved in the past due to lack of resources.

Today, it seems that things have changed and that the voted loans finally allow the realization of the project.

The main goal of this electric vehicle is not only to limit the impact of the American army on its environment but also to reduce the enormous fuel needs, which represent both a colossal amount in the government’s budget but also a supply constraint. 50,000 army vehicles will be electric by 2041.

Several aspects in favor of electric vehicles are to be counted.

The objectives of the energy transition sometimes block armies.

Sweden’s ambitious plans to stop using fossil fuels could endanger and limit the military’s ability to fulfill its missions.

The Swedish military warns that biofuels will fail to power most vehicles. But also could be unsuitable for the cold environments of Scandinavia. The Swedish military pointed out that the country’s climate targets could be an obstacle. They requested that a military exemption be considered

An electric war is not to consider for tomorrow…

NEOM The Line in Saudi Arabia : the futurist and ecologic megalopolis in the middle of the desert

The Space-Based Solar Power : The solution for an efficient clean energy ?